When we think of the Landes, we necessarily think of the beach : one and the same uninterrupted beach of 140 kilometers ! Bordered by the dune, it turns into a huge playground in summer : walking, sand castles, swimming, sliding (surfing, body-surf, body-board, kite-surf, paddle-boarding…), beach sports (volleyball, snowshoeing, beach rugby…) or just to relax! Between the 2 beaches of Tarnos and Ondres, it’s up to you to choose ! 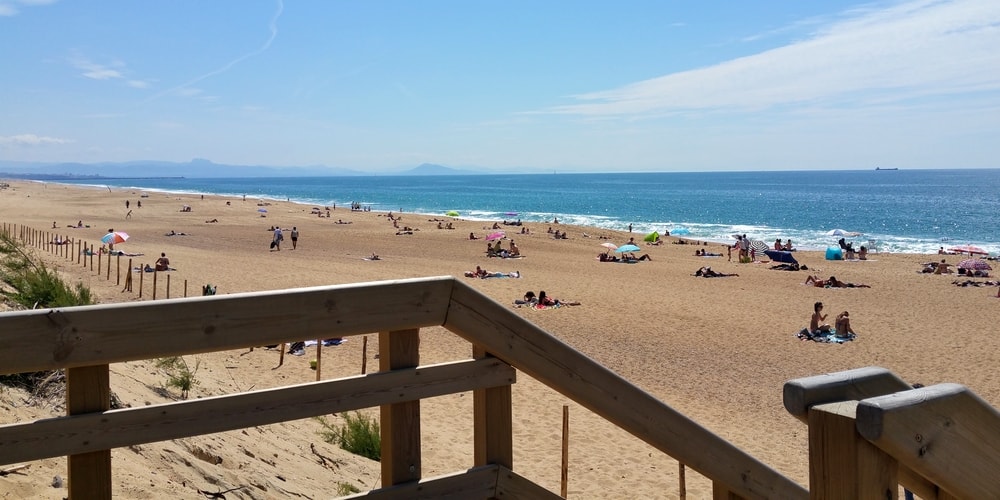 The beach of Ondres is equipped with beach showers & sanitary facilities, free parking (motorhome area), as well as shops and beach services in season: restaurants, snacks, glacier, surf school, swimming club… It is accessible by car, on foot, by bike and by bus/ shuttle in summer. The beach of Ondres is lifeguarded every day in summer : mid-June to early July: from 12 pm to 6:30 pm. July / August : from 11 am to 7 pm. End of August to mid-September: from 12pm to 6:30pm

Live from the beach : 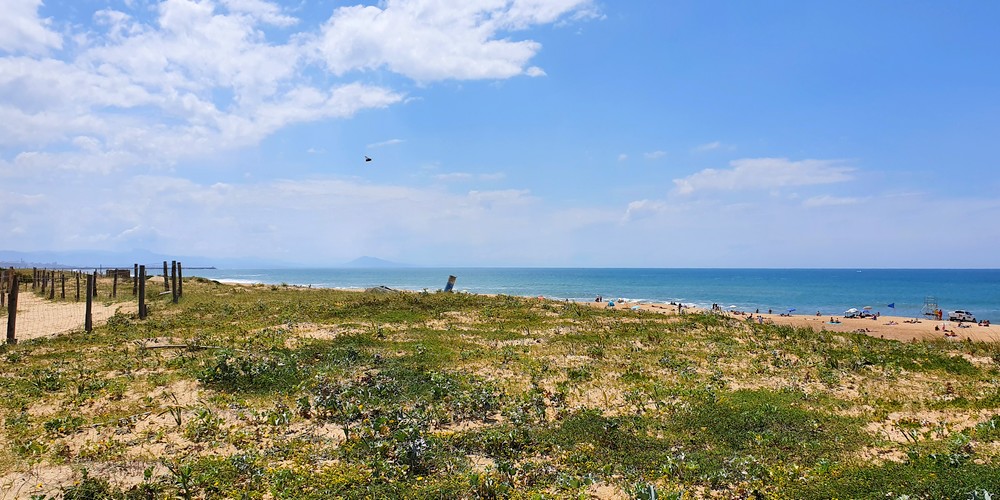 The Tarnos Metro Beach is equiped with beach showers & sanitary facilities, free parking and a placette that hosts some shops and beach services in season: tourist office, restaurants, snacks, glacier, surf school, etc. It is accessible by car, on foot, by bike and by the Chronoplus bus (line 16) in July/ August. Its name comes from the establishment of a RATP (pre-war) summer camp. Little developed, it is appreciated by people who love natural beaches since the dune and the back dune are classified Natura2000. The Metro beach is lifeguarded every day in summer: Mid-June to early July: from 12:00 to 18:30 July/ August: from 11:00 to 19:00 End of August to mid-September: from 12:00 to 18:30.

The Digue’s beach of Tarnos is equiped with beach showers & sanitary facilities, and free parking. Its name comes from the huge dike (1 km) that separates the Landes beach (to the north) and the Basque coast (to the south). The dike offers a magnificent perspective on the Basque coast and the Pyrenees. The beach is accessible to people with reduced mobility who can also enjoy a tiralo to immerse themselves (depending on the conditions). La Digue beach is lifeguarded every day in summer: July/ August: 11am to 7pm.

The particularity of the Atlantic Ocean is that it is he who commands: sometimes calm and flat like the Mediterranean, sometimes strong and stormy to the point of not being able to dip his feet… To safely enjoy the beach and the ocean, it is imperative to respect and enforce the safety instructions posted at the entrance to the beach. At the main entrances, an area called a regulated area is created whose boundaries are materialized by fixed triangular panels with orange and black horizontal stripes. The practice of naturism is tolerated outside the regulated area. Naturists will have to put on a swimsuit to bathe in the area provided for this purpose.

Swimming is monitored only in summer, between the panels topped with BLUE FLAGS and marked Bathing Limit. This supervised swimming area is placed inside the regulated area (defined above) at the most safe place for swimmers. The M.N.S reported bathing conditions by means of “flames” hoisted in the semaphore mat of the first aid station. GREEN FLAG: swimming monitored and no special hazards. YELLOW FLAG: swimming more or less dangerous but monitored. RED FLAG: swimming prohibited. The prohibition on swimming extends throughout the regulated area. Surfing can be done provided that at least three people practice these activities at the same time. NO FLAG: absence of surveillance, bathing will then be deemed to be practicing the risks and perils of each swimmer.

The dune is a sensitive, protected, maintained natural area that shelters a biodiversity as rare as unsuspected: Matthiole lily, asperule, golden basket, ocellated lizards, larks… Everyone can and must respect this heritage by avoiding trampling it and respecting the main accesses to the beaches. Pets are prohibited in the restricted area. Pets are generally tolerated outside of the regulated area and outside of the regulated area. Owners are required to collect manure, as in all public spaces.

It is essential to collect your waste when you leave the beach (presence of sorting bins at the bottom of the dune) to prevent it from sinking or being washed away by the tide. The screeners used to clean the beach have screens that are narrow enough to pick up the main waste, but wide enough to allow the leash to pass (set of micro-plants needed for the beach and dune ecosystem). A butt that escapes the screener will take more than 2 years to decompose and can pollute up to 500 liters of water…